In what was a rather eventful weekend, the day after Stance Wars was a show called The Old School Reunion. Given we were already in Las Vegas, it was a no-brainer to attend a second show. Old School is actually put on by the same organization who threw Stance Wars, however this show caters to a different audience. Stance Wars was open to a very broad range of cars, while Old School had a few more restrictions, to be in the show. The rules are simple, your car must be no newer than 1988, and it has to be an import.

By exclusively catering to vintage import enthusiasts, it gives them a place to meet and hang out. We have a real love for old imports, and were looking forward to spending the day with some other like minded enthusiasts. Quite a few of our own cars at Garage 710 fall into this category actually, however unfortunately many of our projects decided to act up before the trip. While we would have loved to have had more of our own cars out there, the cars that were there more than made up for our disappointment.

This was actually the first year Old School had come to Las Vegas. In previous years the show had only been held in Washington. Despite this being their first year in Las Vegas, the cars in attendance had a healthy diversity. There were a number of oddball cars that you rarely see day to day, or even at shows. All form factors, countries and styles were represented, from old wagons, mini trucks, roadsters, even the occasional Kei van.

One of the highlights was certainly the large gathering of vintage Skylines. There were a number of legendary Hakosukas in attendance, each with their own personality. Many of them had the rather distinct, race inspired, Shakotan style. You are lucky if you get the opportunity to see one of these in the United States, so seeing a group parked together was something else entirely. We were even lucky enough to spot some of these cars roaming the streets, in the nights leading up to the show. Part of the fun of an event like Old School, is not just the show itself, but the experience surrounding it. There are few other places where you will see a group of vintage Datsun’s cruising late into the night.

Of course, all things air cooled were well represented as well. This particular VW Thing had Washington plates, having made a tremendous trip to the show. It stayed true to its Kubelwagen roots, with a healthy ground clearance and well earned patina. I have seen videos of this particular Thing going off road, and being pushed to its limits. Just because a car is a classic, doesn’t mean it can’t be driven hard. It also speaks to the diversity of the owners who came to the show. Even within the scope of classic imports, there a number of styles and interests that are represented here.

A personal favorite of mine was this stunning Mk1 Caddy. In it’s own way, it covered the longest distance to the show, as it sported Hawaiian plates. The car is a wonderful blend of original Mk1 styling, as well as more modern updates. The square headlights remained in tact, but Mk2 fender flares, agressively offset wheels and a perfect stance, updated the look quite a bit. The details continued into the interior, where things look restored to like new condition. I have a personal love for oddball cars, and the creativity their owners bring to a build like this.

The Old School Reunion was a fantastic way for us to close out a long weekend in Las Vegas. It’s quickly topped our list of events that we want to return to in the future. It offered a very casual atmosphere for enthusiasts to get together. There wasn’t a sense of competition, or animosity between different brands or styles. Everyone there simply enjoyed all things related to classic imports. At the end of the day, it’s hard to think of a better way to spend a Sunday afternoon. 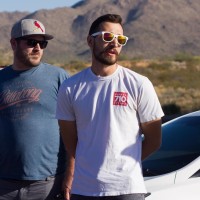